Read on if you're very, very bored. Or interested in that sort of thing.

For those who do not know Ingress, you get given medals for achieving things; resonators destroyed, portals hacked, portals captured. One of these is the Guardian badge - a badge you get in varying levels for holding onto a portal for a given length of time. Since portals in busy areas swap hands fairly frequently, getting the two highest Guardian badges (platinum and onyx) can be something of a challenge - you have to hold a portal without losing it for 90 and 150 days.

(However, there's a catch; you must have a resonator (control unit) on the portal for it to count.)

As this can be a real struggle, there's a certain code of honour among players; it's widely (though not universally) considered bad form to go hunting for someone else's guardian portal if you know where it is; it leads to personal confrontations, bad blood and people taking the game too seriously.

So you will sometimes see people appealing to members of the other side in game chat or Google hangouts to leave a particular portal alone; and mostly this is respected, as Ingress has a reasonable degree of inter-faction courtesy and friendliness.

Back to our story...

Sometime in the autumn, when

clanwilliam was still a fairly junior Frog, we took a portal in our area back after it got wrecked. Somehow, she held it; and our local teammates upgraded it and defended it until it became a P8. It somehow managed to escape destruction for several months, despite some close shaves. However,

clanwilliam no longer had a resonator on it, as her low-level ones had over time been replaced by higher-level resonators. So she suggested to our resident enemy Tafka that if he was passing, he might like to knock one resonator off so that she could replace it and get the Guardian badge - he didn't, but neither did he smash it, which he could easily have done.

Fast forward to a couple of weeks ago; the 8th or 9th of January. One of the other reasonably local Smurfs (AdmiralPellew) had recently started going down Kingsland Road from Dalston at lunchtime, taking out portals where he could. One person on their own has a challenge taking out more than a few P8s, but Pellew started bringing other Smurfs with him, including a returning high-level Smurf (call him Idig). I saw portals falling, including some of mine, and was at home, having the day off. So I went out to intercept them; I was outnumbered and outgunned, so I couldn't do much more than harry them in passing.

clanwilliam's guardian. At which point I figured that I had to do something or she'd lose it. So I went up and introduced myself; and we had a cordial chat; and I said to them that I'd seen them passing and decided to pop out; and asked them if they could spare that one particular portal, as it would mean a lot to

clanwilliam to keep it. They were amicable and pointed out that there was another portal very near it; I said that they were welcome to any other portal, but I'd really rather they spare that one.

They nodded, said goodbye, and started attacking the nearby portal. I managed to hold

clanwilliam's guardian (thanks mainly to

clanwilliam dragging herself out of her sickbed and turning up in the nick of time!); and the incidental damage they did enabled

clanwilliam to deploy a resonator on the portal to her considerable relief.

(It turned out that she'd held the portal for 117 days; she got her platinum Guardian badge that evening.)

Pellew and Idig continued their attacks during the next week; provoking some discussion in the local Frog hangouts; during which I spoke in favourable terms of them, saying that they seemed like good players and decent people.

Turns out that I may have been half wrong on that score... 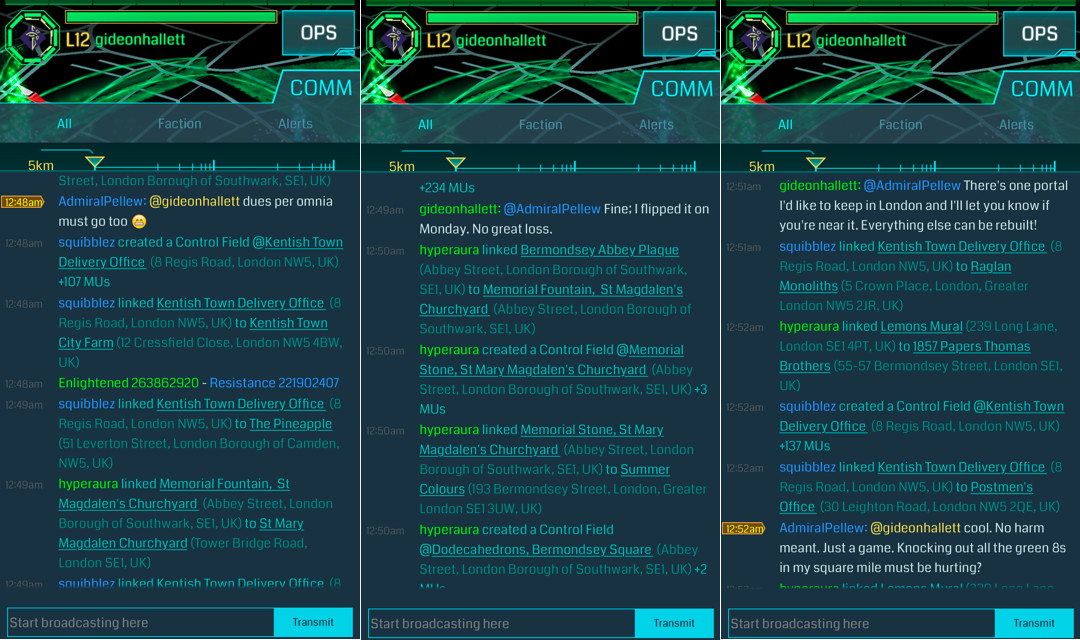 Now, that was a slight surprise. Deus Per Omnia is a portal of mine some way off any route he's ever attacked before. The implication should be obvious; that he was looking for our portals to attack.

I sensed from his last comment that he was trying to get a rise out of me. I wasn't going to rise to the bait, so I said we'd rebuild it. 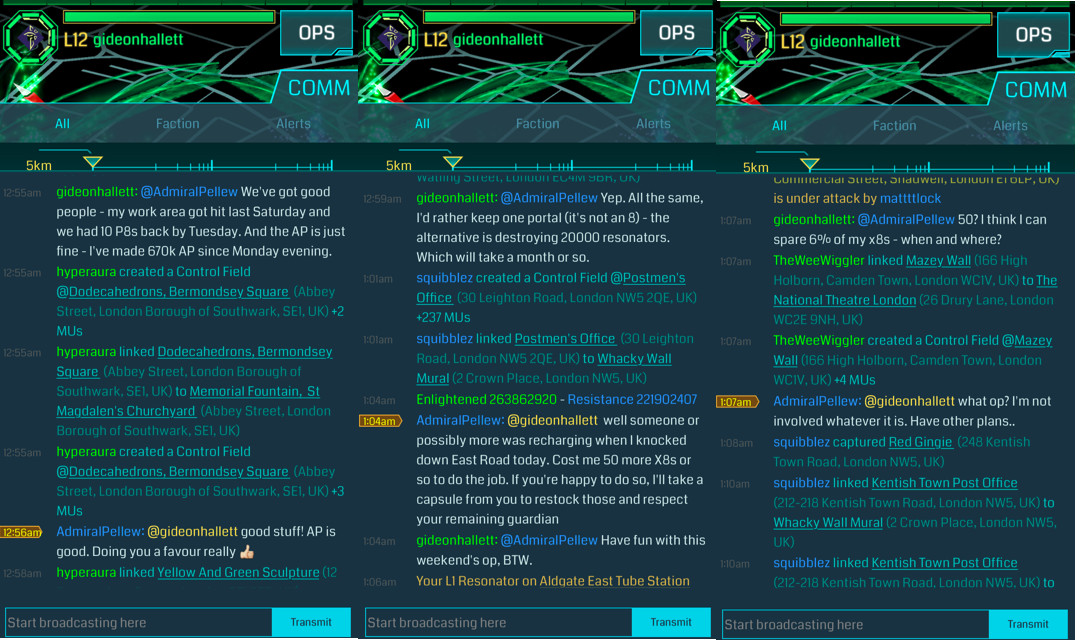 Yes, I was doing the 'what, me, bovvered?' response.

He then complained about our recharging efforts and said it cost him a load of bursters - and tried to extort some out of me!

I was momentarily tempted by his offer, but I know full well what Danegeld is; and I certainly didn't trust him after last Friday's action; but I thought I'd play along for the moment.

When he saw my comment about how many bursters I had, he realised that I had more weaponry than he thought I did; and he got greedy. 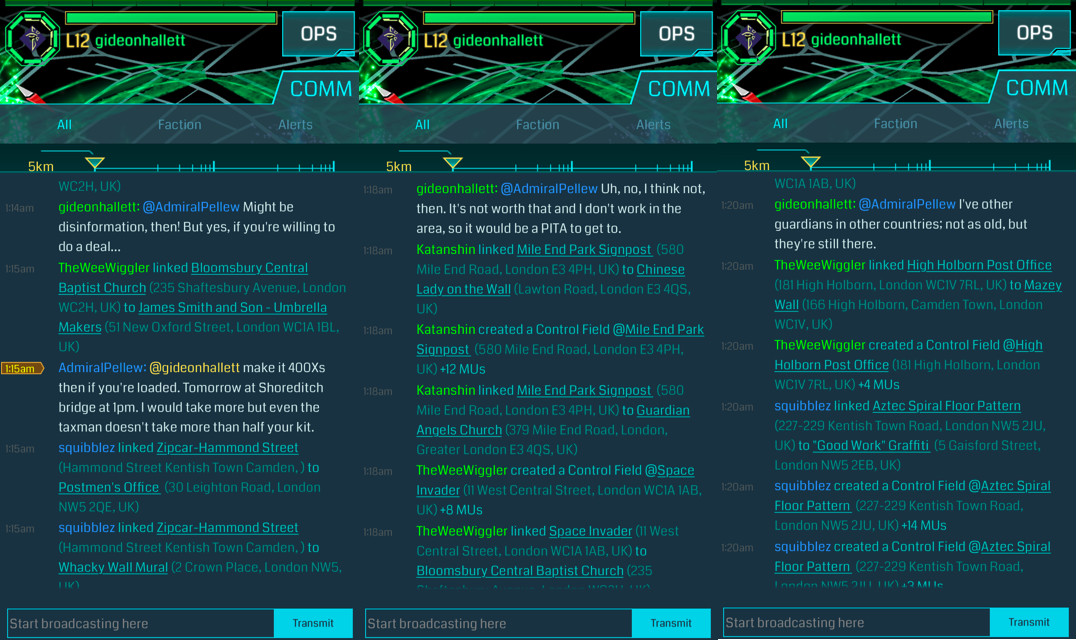 I really couldn't be having with that, so I decided to call a halt to dealings by pointing out that I had portals he wouldn't be able to reach in any reasonable lunchbreak.

At which point, he tried to haggle! - his demand for 400 x8s went down to 100 x8s; but I was tired of the game, and pointed out that he could wipe out everything I had in London repeatedly without delaying me to any real extent.

When he realised that he wasn't getting anything out of me, he gave up and threatened to destroy our area.

Which he can probably do, although it'll take him time and materiel; but all he will do will be giving us easy targets and rebuilding opportunities - and attempted extortion on an open channel is not a good look on anyone.

Ingress is a team game, and there are decent people in both factions. Unfortunately, the opposite also seems to be true.

For the record; everything I've said here is true (from my POV, anyway!) - and I hope that Tafka and Idig are willing to corroborate the bits that they were party to.

It's been a while since I wrote anything original (and this probably isn't either), but I can't help but remember a story idea I discussed with

captainlucy outside the Transylvanian restaurant in Dublin during PCon 2008. And while I don't have the time even for a short short story right now, I've come up with a drabble for it.

It was fun. Let's do it again sometime.

...and the Muir Russell report is out.

I can't be the only one getting a little annoyed at the coverage of Anna Chapman; especially the quotes from her ex-husband.

'Towards the end of our marriage she became very secretive, going for meetings on her own with 'Russian friends', and I guess it might have been because she was in contact with the Russian government."'

Completely disregarding her guilt or innocence, do the words 'Towards the end of our marriage...' not ring giant alarm bells in the critical faculties?

Yes, perhaps she was ordered by her controller to dump her husband and turn into a go-getting capitalist running dog.

And perhaps she had just had enough of the marriage, or was having an affair - both of which are not uncommon marital terminators that have absolutely sod all to do with 'Reds Under The Beds'.

And hey, can we see a possible unstated motive here on the part of the ex-husband? (- quite apart from the money for selling his story)

But no, it has to be due to the fact that she's obviously a modern Mata Hari...

Posit: Carter USM's 'Sheriff Fatman' is one of the finest political satires committed to song in the last 20 years.

Being in the fortunate possession of a few lovely days of sunshine and no work, I decided to head to the British Museum and experiment a bit more with high dynamic range imaging (a.k.a. HDR).

As with a number of non-standard photographic techniques, it's easy to abuse or overuse them, and places like Flickr are full of HDR shots that look like something out of an acid trip; strange colours, strange light balance between the foreground and background.

I was trying not to do that, but rather to give an impression of the scene as it appeared to my eye (as opposed to the camera!)

The rest of the pictures can be found at this location.
Collapse